The idea for this blog is to blog about everything I think about food and food culture. I'll tell you what I like to eat, where I like to eat it and if I thought it was good or if I thought it was crap. My thoughts about food could go anywhere. Hey if you don't like it go blog at methodicaldudereallythinksalotaboutthefoodhesgoingtoeat.blogspot.com

Despite my desire to try new things and restaurants and write about them on this blog I sometimes find myself slipping into going to restaurants that I already know are good.  Not that there is anything wrong with that.  If a place is good it makes sense I would become a frequent customer.  However, I have to remind myself that without trying new places I may never find that next great meal that will keep me coming back.  That's the reason the girlfriend and I decided to try Carmel Burgers (Hazel Dell and Main in Carmel).  I hadn't heard anything about this place.  No preconceptions.  Just a stop on the quest for a great local burger.

The menu at Carmel Burgers is pretty straight forward.  It pretty much consists of burgers of varying sizes, specialty burgers (mushroom, bacon, etc), hotdog, gyros, steakfries and onion rings.  Each burger comes standard with lettuce, tomato and pickle unless specified otherwise.  The girl and I both decided to get the 1/3lb cheeseburger, fries and Cokes.  She swapped out her steak fries for beer battered onion rings for an additional charge.  For both meals together it cost us about 18 bucks which is a little expensive for a burger from a fast-food style restaurant, but if it's a quality product I'm not going to complain too much. 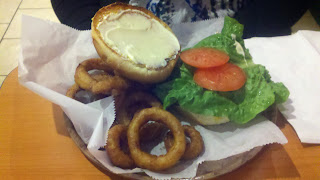 When we got our burgers I thought they were a nice size.  Not overwhelmingly big, but stout enough that I was happy with a single patty.  I don't like veggies on my burger. My burger looks a little plain only being adorned with pickle slices.  If I was to make a tweak to the restaurant it would be adding some sort of special sauce or grilled onions and mushrooms as menu choices.  Luckily they had some very tasty bbq sauce available on the table for a condiment.  It was that great mix of sweet and spicy that tasted like it could have been house made.  The burger itself was a good but not great burger.  It was cooked a little more than I maybe would have preferred.  The meat also tasted unusually peppery for a burger which I somewhat enjoyed, but I'm not sure I'd be in the majority on that one.  The seasoning was quite strong.  The girlfriend agreed about the flavor of her burger and she said it even cut through the veggies and mayo that she elected as toppings. 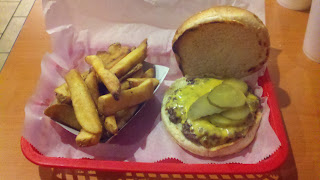 On the basis of the burgers alone I could tell that this place has potential.  However, there were a couple of things that left me shaking my head.  First of all the side items.  I really tried to give them a chance, but I still detest steak fries.  As steak fries usually are these were heavy and mushy.  When I think of a great burger place great fries so often go hand in hand with that.  I want fries that are light and crispy while retaining that potato flavor.  These steak fries were just mediocre filler that weighed me down for the rest of the night.  Perhaps even the heavy fries wouldn't have been so bad without adding in the bun on which they decided to serve these burgers.  The buns were nicely toasted sesame seed buns, but they were way way too big.  The burger was fairly large, but it was dwarfed by the giant bun on which it was served.  If I'm eating a 1/3 lb burger and I can't see the meat when the bun is on that is a problem. The onion rings were actually quite tasty with quite a bit of beer flavor in them.  I was hoping they were hand battered and made in house, but after seeing food service posters for them by the counter on the way out I have to believe otherwise.

Aside from the food I found  a couple of other things a little bit strange about the restaurant.  Based on their website, www.carmelburgers.com, it seems like they want to be a cool hangout type place.  They tout their craft beers on sale and flat screen tvs.  While both of those items were present it still didn't contribute to that type of hangout atmosphere.  The music playing over the speakers was inordinately loud.  The televisions weren't even turned on to a particular channel, and the tables aren't really comfortable enough or laid out in such a way as to make it an easy place to drink with buddies and watch the game.

In conclusion maybe I didn't find that next great local burger place that will make me a regular customer, but I did find one that with some minor tweaks could be much better than average.  To put it in pop culture parlance if Carmel Burgers was a girl that someone brought back to the Jersey Shore house she wouldn't be a dime but I wouldn't be running to sound the grenade whistle either.  (lame pop culture reference!!!)

Taste 6.5/10  I wanted to give it a little bit better of a score, but there were enough little problems that dragged it down.

Value 3/10  I could have spent the same amount of cash at Five Guys or 96th Street Steakburgers and had a meal I enjoyed more.

I was wondering if this is worth a stop or not. Within 10 miles of the place, there is 96th St. Steakburgers, Culvers and 5 Guys. All good burgers. I wish it the best though. If I was going to open a burger place in Carmel, I think that I would’ve went more high end like this concept… http://www.bluburger.com/menu.html

One thing I didn't mention in the post is that they have an eating challenge. From their website: Carmel Carnivore Challenge $35

Can you do it?

Eat it all in 45 minutes and win a Carmel Burgers t-shirt, have your photo posted on our Facebook Wall of Carniviores & be the subject of one of our Tweets!


Based on how heavy I found my 1 1/3lb burger and steak fries there is no way I could do this. I wanted to like this place more than I did. Other than the interesting peppery taste of the meat and the eating challenge they aren't doing much to distinguish themselves in a positive way from the other places you mentioned. Maybe I'll do a revisit sometime since I'm still kind of on the fence about the place.

Hubs and I almost went there on Saturday, but we were looking for a place to relax. From our walk by, it didn't look like it and you just confirmed it. But, we may hit it up for a lunch, though it sounds like it will be a pricey lunch for a quick burger. Wibia hit it when he mentioned others in close proximity. I did hear their gyro's are amazing, so when we try (which I assume we will) I'll let you know how it goes.

Good to see an American institution actually reviewed on this uber-liberal site. Remember: that delicious taste is "red meat" - something that's lacking from too many diets nowadays.

I often see these guys on my Facebook feed under the Sponsored ads/posts/whatever. Good to know that I should probably avoid them.

Sounds like I could get a meal for about the same price at Bub's Burgers in Carmel, on Main Street just off the Monon Trail.

I'm On The Twitters

Brent
IN
I'm a 27 year old man living in the Indianapolis area and I love food. I like to eat well, but affordable and without pretense. If you have any restaurant suggestions feel free to email me at brentasmith@att.net